Is that it? This unrelenting background noise of modern, globalized life screechingly calling for efficiency, rationality and commerce? Always – from everyone. What other dimension exists alongside this physical world, which reduces us to function, that exploits us and leaves us feeling alone? In the continuous pursuit of spirituality there is apparently a deep, human longing to find an additional, comforting reality. But which one? What is the path leading to it? In einS choreographer Canan Erek examines this search, tinged time and again by doubt and disorientation, yet also by fleeting moments of happiness. 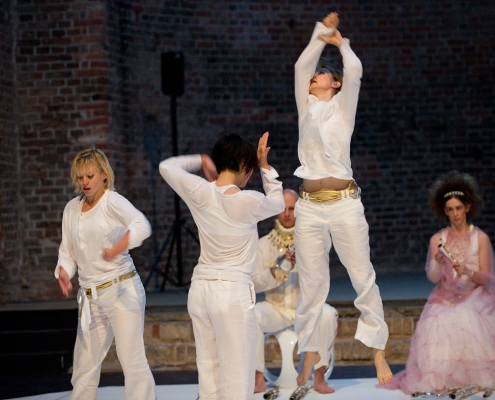 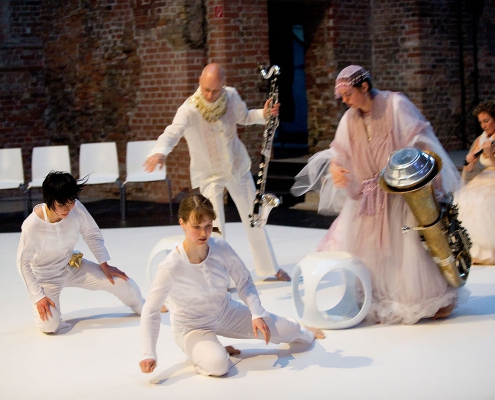 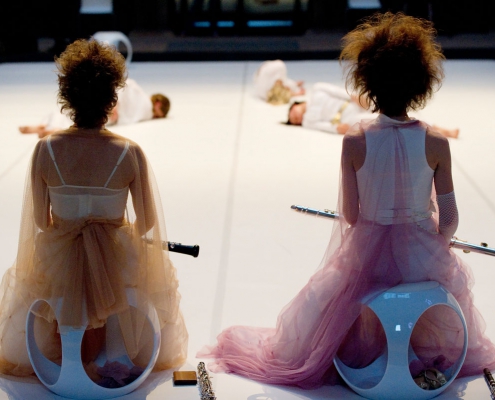 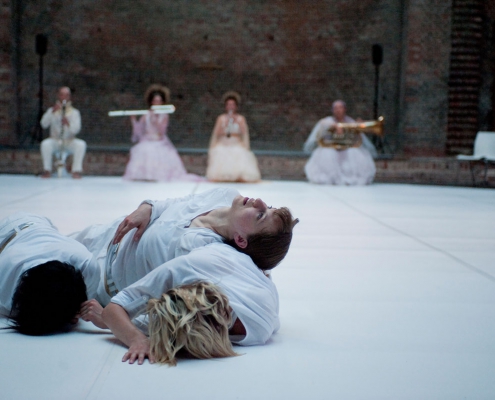 “…Divine breath plays a central role in Canan Erek’s piece. The four musicians, who display a supernatural effect, distinguish themselves primarily through a remarkable silence…. The restraint of melodies and melodious sounds of any kind produces a stifled rhythm, which, along with the recurring movement patterns of the three dancers, slows down reality. They symbolize a trinity without being in unison at all times.”
July 4th, 2010 Dance Unity by Rain Kencana

“Another world opens up – far from big city noise, immersed in atmospheric timelessness… The focus remains on the dancers who move with a great deal of sensitivity. Knocked about by the strains of the outer world, they pull together, experience the greatest possible harmony among each other only to be ripped apart all of a sudden in the next moment. Thanks to the lively sense of expectation, combined with a return to one’s self that never fully blocks out the spectator, the dance produces a sense of spirituality far from any religions. Erek and Andre manage to perfectly coordinate the venue, stage design, sound and dance – without being dramatically emotional.”
June 30th 2010 www.tanzpresse.de by Ann-Christin Görtz

“An almost spiritual moment with a truly stronger impact comes at the very end when dancers and musicians sing soft trilled tie-tones that slowly surge and subside, mesh with one another, thereby producing a musical limbo.“
June 28th 2010 taz by Tim Caspar Boehme

“…when all of the actors wander across the stage and join together in song, einS experiences a magical moment.”
June 29th 2010 Süddeutsche Zeitung by Dorion Weickmann